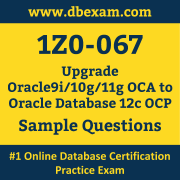 This Upgrade Oracle9i/10g/11g OCA to Oracle Database 12c OCP certification sample practice test and sample question set are designed for evaluation purposes only. If you want to test your Oracle 1Z0-067 knowledge to identify your areas of improvement and get familiar with the actual exam format, we suggest you prepare with the Premium Oracle Database 12c Administrator Certified Professional (upgrade) (OCP) Certification Practice Exam. Our team of Oracle Database experts has designed Questions-Answers for this premium practice exam by collecting inputs from recently certified candidates. Our premium Oracle 1Z0-067 certification practice exam will boost your confidence as well as your actual Oracle Upgrade Database exam result.

01. Which three statements are true regarding the use of the Database Migration Assistant for Unicode (DMU)?
a) A DBA can check specific tables with the DMU
b) The database to be migrated must be opened read-only.
c) The release of the database to be converted can be any release since 9.2.0.8.
d) The DMU can report columns that are too long in the converted characterset
e) The DMU can report columns that are not represented in the converted characterset
02. Consider the following scenario for your database:
- Backup optimization is enabled in RMAN.
- The recovery window is set to seven days in RMAN.
- The most recent backup to disk for the tools tablespace was taken on March 1, 2013.
- The tools tablespace is read-only since March 2, 2013.
On March 15, 2013, you issue the RMAN command to back up the database to disk. Which statement is true about the backup of the tools tablespace?
a) The RMAN backup fails because the tools tablespace is read-only.
b) RMAN skips the backup of the tools tablespace because backup optimization is enabled.
c) RMAN creates a backup of the tools tablespace because backup optimization is applicable only for the backups written to media.
d) RMAN creates a backup of the tools tablespace because no backup of the tablespace exists within the seven-day recovery window.
03. Which two statements are true regarding SecureFile lobs?
a) The amount of undo retained is user controlled.
b) They can be used only for nonpartitioned tables.
c) Fragmentation is minimized by using variable-sized chunks.
d) They support random reads and writes of encrypted LOB data.
04. For which two requirements would you use the Database Resource Manager?
a) limiting the CPU used per database call
b) specifying the maximum number of concurrent sessions allowed for a user
c) specifying the amount of private space a session can allocate in the shared pool of the SGA
d) limiting the degree of parallelism of operations performed by a user or group of users
e) specifying an idle time limit that applies to sessions that are idle and blocking other sessions
05. A database is running in archive log mode. The database contains locally managed tablespaces. Examine the RMAN command:
RMAN> BACKUP AS COMPRESSED BACKUPSET SECTION SIZE 1024M DATABASE;
Which statement is true about the execution of the command?
a) The backup succeeds only if all the tablespaces are locally managed.
b) The backup succeeds only if the RMAN default device for backup is set to disk.
c) The backup fails because you cannot specify section size for a compressed backup.
d) The backup succeeds and only the used blocks are backed up with a maximum backup piece size of 1024 MB.
06. Which three statements are true about unplugging a pluggable database (PDB)?
a) The PDB must be open in read only mode.
b) The PDB must be dosed.
c) The unplugged PDB becomes a non-CDB.
d) The unplugged PDB can be plugged into the same multitenant container database (CDB)
e) The unplugged PDB can be plugged into another CDB.
f) The PDB data files are automatically removed from disk.
07. Which two statements are true about dropping a pluggable database (PDB)?
a) A PDB must be in mount state or it must be unplugged.
b) The data files associated with a PDB are automatically removed from disk.
c) A dropped and unplugged PDB can be plugged back into the same multitenant container database (CDB) or other CDBs.
d) A PDB must be in closed state.
e) The backups associated with a PDB are removed.
f) A PDB must have been opened at least once after creation.
08. You want to reduce fragmentation and reclaim unused space for the sales table but not its dependent objects. During this operation, you want to ensure the following:
i. Long-running queries are not affected.
ii. No extra space is used.
iii. Data manipulation language (DML) operations on the table succeed at all times throughout theprocess.
iv. Unused space is reclaimed both above and below the high water mark.
Which alter TABLE option would you recommend?
a) DEALLOCATE UNUSED
b) SHRINK SPACE CASCADE
c) SHRINK SPACE COMPACT
d) ROW STORE COMPRESS BASIC
09. Identify two scenarios in which the RMAN crosscheck command can be used.
a) when checking for backups that are not required as per the retention policy
b) when updating the RMAN repository if any of the archived redo log files have been deleted without using RMAN to do the deletes
c) when updating outdated information about backups that disappeared from disk or media or became corrupted and inaccessible
d) when synchronizing backups, which were not performed by using RMAN, with the RMAN repository
e) when listing backups that are required for recovery operations
10. You notice a performance change in your production Oracle 12c database. You want to know which change caused this performance difference.
Which method or feature should you use?
a) Compare Period ADDM report
b) AWR Compare Period report
c) Active Session History (ASH) report
d) taking a new snapshot and comparing it with a preserved snapshot