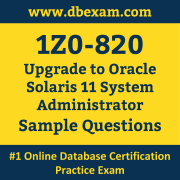 01. Your task is to convert a JumpStart sysidcfg file to an Automated Installer (AI) sc_profile.xml file, using js2ai. Select two unsupported items that will require changes.
a) terminal = zterms
b) name_service-NTS+
c) timezone=US/pacific
d) system_locale=en_US
e) network_interface=PRIMARY
f) root_password=rJmvLUXM10cU
02. Identify the correctly matching pair of equivalent functionality of JumpStart and Automated installer (AI).
a) JumpStart: begin script
AI: package repository
b) JumpStart: setup_server
AI: installadm create-service
c) JumpStart: add_Install_client
AI: SMF system configuration profile files
d) JumpStart: finish scripts and sysidsfg files
AI: manifest files
03. Select the two correct descriptions of the configuration of a default installation of Oracle Solaris 11.
a) The root account no longer exists.
b) Access to the root account is restricted by RBAC.
c) The Solaris Management Console GUI (SMC) can be used to assign the root role to a user.
d) telnet, ftp, and other services are disabled for network access, but root can log in by using SSH.
e) Any logged in user, who knows the password for the root account, can modify the system configuration.
f) usermod -R +root alice will allow user alice to assume the role of root to modify the system configuration.
04. You are setting up an automated installer (AI) install server and issue the following command:
installadm create-service -n prod_ai -s /repo/prod_ai.iso \ -i 192.168.1.100 -c 5 -d /export/repo
Which four options describe the install server that you have configured?
a) The service name is prod_ai.
b) DHCP base IP address is 192.168.1.100
c) The initial IP address for the install clients will be 192.168.1.100. This IP address is temporary. After the client is booted, it will use IP addresses in the following range: 192.168.1.101-105.
d) Five IP addresses are allocated for DHCP clients, starting with 192.168.1.100.
e) The Install server will support up to five clients.
f) The AI net image ISO file is located in /repo/prod and the net image ISO will be unpacked in /export/repo.
g) The AI net image ISO file is located in /repo/repo and is named /repo/prod/_ai.iso.
05. Before booting test zone a non-global zone, you want to connect to the zone’s console so that you can watch the boot process. Choose the command used to connect to testzone’s console.
a) zoneadm -C testzone
b) zoneadm -console testzone
c) zlogin - z testzone console
d) zlogin - z testzone - C
e) zlogin -C testzone
f) zoneadm - testzone - c
06. New features wore added to ZFS in Oracle Solaris11. Your justification to upgrade from Solaris10 to oracle Solaris11 is that it will be possible to take advantage of the enhancements that were made to ZFS.
Identify the three ZFS functions and features that are included in Oracle Solaris 11, but not in Solaris 10.
a) Encrypted ZFS datasets
b) Ability for ZFS to detect and remove redundant data from the tile system
c) Shadow Data Migration
d) Ability to split a mirrored ZFS storage pool
e) Ability to use ZFS on the boot drive and boot to a ZFS root file system.
f) elimination of the swap file system when using ZFS on the root disk
07. Which three statements accurately describe the Automated Installation (AI) client?
a) If the AI client does not match any criteria to use a custom manifest or script, the default manifest is used.
b) If the AI client does not match any criteria to use a custom manifest or script, the automated installation aborts.
c) Any manifest or script in a service can be designated to be the default for that service.
d) Only the default.xml file is used as the default AT client manifest.
e) If a client system does not use any SC profile, then an interactive tool opens on that client at first boot after that client installation to complete the configuration of that client.
f) If a client system does not use any SC profile, then the install server will use the default SC profile.
08. A change in your company’s security policy now requires an audit trial of all administrators assuming the sysadm role, capturing:
- Executed commands, including options
- Logins and logouts
There are two command necessary to accomplish this change. One is a rolemod command. What is the other?
a) auditconfig set policy=argv
b) auditconfig -setpolicy +argv
c) auditconfig -setflags lo, ex sysadm
d) auditconfig set flags=lo, ex sysadm
09. Your mentor suggests using the dladm rename-link command to rename the network datalinks. What are the two advantages of following this advice?
a) It can clarify which network interface has what purpose.
b) It can simplify specifying the network interface with the dladm modify-aggr command.
c) It can simplify specifying the network interface with the dladm modify-bridge command.
d) It can simplify IP filter rule changes if the network interface is replaced with a different type.
e) It can prevent accidental deletion of the network interface with the dladm deletephys command.
f) It can prevent accidental deletion of the network interface configuration with the ipadm delete- addr command.
10. The COMSTAR framework provides support for the iSCSI protocol. Select three options that correctly describe the COMSTAR framework.
a) iSCSI devices can be used as dump devices.
b) SCSI commands are carried over IP networks and enable you to mount disk devices from across the network onto your local system.
c) Large amounts of data can be transferred over an IP network with very little network degradation.
d) COMSTAR allows you to convert any Solaris11 host into a SCSI target device that can be accessed over a storage network.
e) One IP port can handle multiple ISCSI target devices.