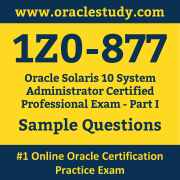 01. A client has asked you to install a Solaris 10 OS, SPARC-based workstation in a LAN that hosts no other Solaris OS workstations.
Which two protocols allow for a web server to respond to this new workstation's WAN boot client requests?
(Choose two.)
a) NFS
b) TFTP
c) HTTP
d) RARP
e) HTTPS
02. A complete restore from the tape backup of the /export/home file system has been successfully completed. The system created a file for check-pointing or passing information between the incremental restores.
What action do you take with this file?
a) examine the /var/sadm/install/restore.log file for details of the restore
b) delete the /var/log/restore.log file
c) delete the restoresymtable file
d) examine the /var/log/restore_log file for details of the restore
03. A few months ago, your department received several new SPARC-based Sun workstations. As part of your Solaris 10 OS installation procedure, you want to make sure that the firmware on these workstations is at the latest revision.
Which two ok prompt commands allow you to see the firmware revision?
(Choose two.)
a) version
b) banner
c) .version
d) show-devs
e) .registers
04. A review of system security dictates that root logins are to be completely disabled. In the file that contains the entry that controls root logins, to what must you set the line beginning CONSOLE= for root logins to be disabled?
a) CONSOLE=/dev/ttya
b) CONSOLE=
c) CONSOLE=/dev/pts/1
d) CONSOLE=/dev/console
05. As system administrator, you are asked to diagnose the failure of a service that was supposed to start automatically at boot time on a SPARC-based system.
Which FORTH Monitor command causes SMF to start all services serially and display messages on the console for all services?
a) boot -v
b) boot -m debug
c) boot -a debug
d) boot -m milestone=none
06. Given:
# df -h | egrep -i "File|dsk"
Filesystem size used avail capacity Mounted on /dev/dsk/c0t2d0s0 7.9G 3.0G 4.8G 38% /
# fssnap -F ufs -o bs=/var/tmp/fssnap.etc /etc
fssnap: ioctl: error 22: Invalid argument
Which two statements are true?
(Choose two.)
a) fssnap failed because the backing store file was out of space.
b) fssnap -F ufs -o bs=/var/opt/fssnap.etc /etc will run successfully.
c) fssnap failed because the backing store file was located on the same file system.
d) fssnap needs either another ufs or nfs file system to save backing store file.
e) fssnap -F nfs -o bs=/var/tmp/fssnap.etc /etc will run successfully.
07. On a SPARC based system two device aliases named bootdisk01 and bootdisk02 have been created. These aliases allow the boot system to boot from two different disks, and currently bootdisk01 is used by default.
Which Solaris command amends the boot-device parameter to cause the system to boot from bootdisk02 by default?
a) eeprom boot-device=bootdisk02
b) eeprom boot-device bootdisk02
c) setenv boot-device=bootdisk02
d) setenv boot-device bootdisk02
08. The following ZFS file system is available on your system:
NAMEUSED AVAIL REFER MOUNTPOINT
files 82K 72.8G 24.5K /data
You want to temporarily unmount the /data file system. Which set of commands will unmount the /data file system so that it is not available to users and then mount the system when you are ready to make it available again?
a) umount /data - to unmount the file system; mount /data to mount the file system
b) zfs unmount /data - to unmount the file system; zfs mount /data to mount the file system
c) zfs umount /data - to unmount the file system; zfs mount /data to mount the file system
d) zfs unmount /data - to unmount the file system; zfs mount -a to mount the file system
09. The security policy for a company requires that volume management is disabled for all the systems. A user has a DOS-formatted diskette with files that need to be transferred to that user's home directory.
Which command mounts the diskette?
a) mount -F pcfs /dev/rdiskette /mnt
b) mount -F pcfs /dev/diskette /mnt
c) mount -F pcfs /floppy/floppy0 /mnt
d) mount /floppy/floppy0 /mnt
10. You are installing a software application onto your server. The software installation notes specify that the Solaris 10 OS must have patch 104945-02 applied.
You have downloaded the patch into your /home directory and the ls command lists it as follows: 104945-02.zip You are ready to install the patches. Which answer describes the correct procedure for installing the patch?
a) cp the patch to /var/tmp cd /var/tmp patchadd -p 104945-02
b) /usr/bin/unzip ~/104945-02.zip patchadd 104945-02.zip
c) /usr/bin/unzip ~/104945-02.zip cp the patch to /var/tmp cd /var/tmp;patchadd 104945-02
d) cp the patch to /var/tmp; cd /var/tmp /usr/bin/unzip 104945-02.zippatchadd 104945-02