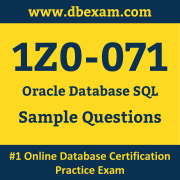 This Oracle Database SQL certification sample practice test and sample question set are designed for evaluation purposes only. If you want to test your Oracle 1Z0-071 knowledge to identify your areas of improvement and get familiar with the actual exam format, we suggest you prepare with the Premium Oracle Database SQL Certified Associate (OCA) Certification Practice Exam. Our team of Oracle SQL and PL/SQL experts has designed Questions-Answers for this premium practice exam by collecting inputs from recently certified candidates. Our premium Oracle 1Z0-071 certification practice exam will boost your confidence as well as your actual Oracle Database SQL exam result.

01. The DESC command can be used to do which of the following?
a) Show a table’s columns and the data types of those columns
b) Show a brief paragraph describing what the table does
c) Show a table’s name and who created it
d) Show the data that is contained within a table
02. Assume you have a table ITEMS that includes a column STATUS. Which of the following statements is syntactically correct?
a) SELECT * FROM ITEMS FETCH NEXT 20 % ROWS ONLY;
b) SELECT * FROM ITEMS FETCH NEXT 20 PERCENT ROWS ONLY;
c) SELECT * FROM ITEMS FETCH NEXT 20 ROWS WITH TIES;
d) SELECT * FROM ITEMS ORDER BY STATUS FETCH NEXT 20 ROWS WITH TIES;
03. What can you use to submit SQL statements for execution?
(Choose all that apply.)
a) PHP
b) Java
c) SQL Developer
d) SQL*Plus
04. If you want to display a numeric value with dollar signs and commas, which of the following is the best approach to take?
a) The TO_NUMBER function with a format model
b) The TO_CHAR function with a format model
c) A combination of string literals that contain commas and dollar signs, along with the CONCAT function
d) The MONEY data type
05. You can add your own comments to the data dictionary with the COMMENT statement using which of the following?
a) INDEX
b) COLUMN
c) SEQUENCE
d) TABLE
06. Which one of the following is a DML statement?
a) ADD
b) ALTER
c) UPDATE
d) MODIFY
07. Which two statements are true regarding the GROUP BY clause in a SQL statement?
(Choose two.)
a) You can use column alias in the GROUP BY clause.
b) Using the WHERE clause after the GROUP BY clause excludes the rows after creating groups.
c) The GROUP BY clause is mandatory if you are using an aggregate function in the SELECT clause.
d) Using the WHERE clause before the GROUP BY clause excludes the rows before creating groups.
e) If the SELECT clause has an aggregate function, then those individual columns without an aggregate function in the SELECT clause should be included in the GROUP BY cause.
08. You need to determine the day of the week for a particular date in the future. Which function will reveal this information?
a) TO_CHAR
b) DAY_OF_WEEK
c) TO_DATE
d) None of the above
09. No-user-defined locks are used in your database. Which three are true about Transaction Control Language (TCL)?
(Choose three.)
a) COMMIT erases all the transaction's savepoints and releases its locks.
b) ROLLBACK TO SAVEPOINT undoes the transaction's changes made since the named savepoint and then ends the transaction.
c) COMMIT ends the transaction and makes all its changes permanent.
d) ROLLBACK without the TO SAVEPOINT clause undoes all the transaction's changes but does not erase its savepoints.
e) ROLLBACK without the TO SAVEPOINT clause undoes all the transaction's changes but does not release its locks.
f) ROLLBACK without the TO SAVEPOINT clause undoes all the transaction's changes, releases its locks and erases its savepoints.
10. Which two methods are supported for migrating your on-promises Oracle database to an Oracle Autonomous transaction Processing (ATP) database in Oracle cloud Infrastructure?
(Choose two)
a) Load text files into ATP using SQL Developer
b) Use RMAN duplicate
c) Use oracle data Pump
d) Transfer the physical database files and re-create the database
e) Use database backup and restore